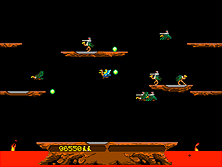 INSTRUCTIONS
Joust is a platforming game where the player controls a yellow knight riding a flying ostrich or stork, from a third-person perspective. Using the two-way directional joystick and the button for flapping the ostrich's wings, the player flies the knight amidst the floating rock platforms and above pools of lava; when maneuvering off the screen to either side, the player will continue its path reappearing from the opposite side. The rate at which the player repeatedly presses the button causes the ostrich to fly upward, hover, or slowly descend. The objective is to defeat groups of enemy knights riding buzzards that populate each level, referred to as a "wave". Upon completing a wave, a subsequent more-challenging wave will begin. Players navigate the knight to collide with enemies. The elevation of an enemy in relation to the player's knight determines the outcome of the collision. If the protagonist is higher than the enemy, the villain is defeated and vice versa. A collision of equal elevations results in the two knights bouncing off each other. A defeated enemy will turn into an egg that falls toward the bottom of the screen, which a player can collect for points. An egg that sits on a platform long enough will hatch into a new knight; if the player does not pick him up, he will gain a new mount and must be defeated again. The game features three types of enemy knights—Bounder, Hunter, and Shadow Lord—that are worth different amounts of points. A pterodactyl will appear after a predetermined time frame to hunt the hero. A second player, controlling a blue knight on a stork, can join the game. The two players can either cooperatively complete the waves or attack each other while competitively defeating enemies.
KEYS
When the Joust game starts in the emulator, it will eventually show the message FACTORY SETTINGS RESTORED and pause. Press the ADVANCE button on the on-screen control panel to set the Joust arcade machine playing and ready for quarters. Press the on-screen control panel to insert quarters and start a one or two-player game. If you would prefer to use the keyboard (or are in full-screen mode), press 5 to insert quarters, and press 1 or 2 to start a one or two-player game. PLAYER ONE: Use the left and right arrow keys to turn the knight, and either CTRL key to flap.
PLAYER TWO: Use the D and G keys to turn the knight, and the A key to flap.

Joust is an arcade game developed by Williams Electronics and released in 1982. It is a platform game that features two-dimensional (2D) graphics. The player uses a button and joystick to control a knight riding a flying ostrich. The object is to progress through levels by defeating groups of enemy knights riding buzzards. John Newcomer led the development team, which included Bill Pfutzenrueter, Jan Hendricks, Python Anghelo, Tim Murphy, and John Kotlarik. Newcomer aimed to create a flying game with co-operative two-player gameplay, but wanted to avoid a space theme, which was popular at the time. Staff worked within the technical limitations of the hardware (originally developed two years earlier for Williams' first game, Defender), excluding concepts and optimizing the visuals. The game was well received in arcades and by critics, who praised the gameplay. The gameplay mechanics influenced titles by other developers. Joust was followed by a sequel three years later, and was ported to numerous home and portable platforms.

In Joust, players take control of a knight with a lance who rides their flying ostrich (or stork, for Player 2) to do battle against computer-controlled evil knights who ride atop vultures.

Players must flap their steed's wings to hit the enemy from a higher jousting point to destroy the vulture and its rider. Once the enemy has been hit, an egg falls to one of the platforms below. The heroic knights must destroy the eggs before they hatch and release new and increasingly more difficult knights. The three strengths of enemy knights are Bounder (red knight), Hunter (white knight), and Shadow Lord (blue knight). These enemy knights are not the only challenge to be found in the game. Players must also contend with crumbling platforms, lava trolls who attempt to pull knights into the fire, and the dreaded "unbeatable"(?) pterodactyl.

The game was novel for its time for being one of the few two-player simultaneous games in the arcade.

I have been working tirelessly to make sure that the game would be an exact replicate of the original game of joust from 1982 by Williams electronic down to the finest details.
If you which to be in rolled in the beta testing, please email me at: TimothyReiner@atrservices.co.uk
Reviewer: NNPS - favoritefavoritefavoritefavoritefavorite - October 27, 2020
Subject: Oh my goodness! Joust
I was 20 when this game came out and I spent many a long hour playing this game and working hard to get better and better. There was a point far in to the game when a giant dragon came out and you had to set yourself at just the right spot and catch it in the mouth. If you did you could hold that spot and rack up points like nobodies business. The lava and the eggs that would hatch from there if you didn't catch them, oh dear. You could run on your Ostrich and hop opposing knights as they came along. This game was one of the very best. It took super timing, awesome hand to eye coordination, familiarity with the field and opposing battalions and pure skill. A lot of people couldn't play it beyond a few rounds, but if you got good the adrenaline would purely flow, round after round. The nice thing is it would get very hot but at the end of the round you had a moment to gather yourself again before the onslaught. It was rare, very rare to beat this game - but I know for sure I did it once and I just sat there and rocked it, killing giant dragons one after another. What a game!!! Wow!!! Now I am going to go look for Pole Position and Donkey Kong.
Reviewer: tyro2090 - favoritefavoritefavoritefavorite - September 18, 2020
Subject: tyro
press up up during your initals to get a sound test